The August Chelkowski Institute of Physics, University of Silesia 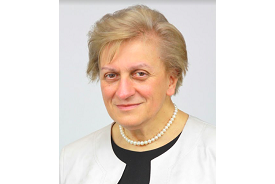 The August Chelkowski Institute of Physics, University of Silesia

Full professor at The August Chelkowski Institute, University of Silesia

1. The main researches were focus on the structural and dynamic studies using X – ray neutron diffraction and Raman scattering in perovskite materials.
2. Since 1999 the studies of the new photosensitizers applied in the photodynamic tumor therapy: synthesis, physical characterizations, biological tests on cancer cells, in vitro and in vivo studies.
3. Studies of the nanomaterials such liposomes, CNT, nanoparticles applied as a drug carriers to tissues

Leader of the specialization on the Physics master studies “Nanophysics and mesoscopic materials – modeling and applications” realized as a common Polish – French master studies, with the University of Maine, France. Co-author of the new studies “Biophysics”,

The member of the polish and international organizations: