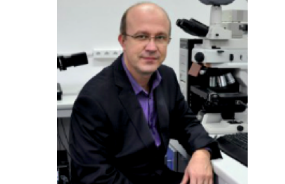 Professor Krzysztof Szczubiałka is a research worker at the Department of Physical Chemistry at the Faculty of Chemistry of the Jagiellonian University in Krakow. He is the head of the research group Polymer and Hybrid Materials for Biomedical and Environmental Applications. He conducted research at universities in Japan (Osaka University), Belgium (Vrije Universitat Brussel) and the USA (University of Central Florida). He is the author of approximately 100 publications in international and national magazines as well as over a dozen patents and patent applications. The innovations he developed were awarded in the country (the bronze medal at the Intarg 2018 conference in Katowice, the Puls Medycyny award) and abroad (Geneva, Zagreb, Valencia). His research interests include polymeric anticoagulants and anticoagulant inhibitors, polymers with antiviral properties, polymer and hybrid photocatalysts for the degradation of environmental pollutants, polymer cryoprotectants, polymeric cell culture media, and mercury adsorbents and sensors, as well as disease marker compounds.